Case Study: Is Asbestos in Schools Really an Issue?

On the 12th October 2012, a high school in Wales suddenly closed evacuating more than 900 pupils with immediate effect. The closure of Cwmcarn High School in Caerphilly, Wales resulted after “high levels of airborne asbestos” were found in several school buildings.

A section of the school (believed to be a newer extension) has since been reopened for sixth formers, but the majority of children will now have to be schooled elsewhere. It has been estimated that the asbestos removal and decontamination of the school will take 12 months and is expected to cost £3 million. There is great anxiety amongst parents about the amount of exposure their children have been subjected to.

Was this a one off or is there a bigger issue?

What will shock everyone (parents, pupils, teachers and frankly anyone who has ever been to school) is just how much of our school system is in a similarly lethal state to Cwmcarn.

The Department of Education’s best estimate is that over 75% of UK schools contain asbestos. Although this percentage is thought to be even higher. For example, about 90% of schools in Wales, Greater Manchester, Kent and the North East contain asbestos.

The Health & Safety Executive summarised the amount of the use of asbestos in schools as follows:

“Of the approximate 20,400 primary schools and 3,400 secondary schools in the UK, some 13,000 were built between 1945 and 1974, when the use of Asbestos Containing Materials (ACMS) in building was at its peak. Many other school premises would have been refurbished during or since that period, providing the potential for the introduction of ACMs e.g. lagging, ceiling panels, partition walls, sprayed coatings. This suggests that a high proportion of our present schools contain asbestos and represent the potential to release deadly fibres.”

So is asbestos in schools a real problem?

On 31st October 2012, the Health & Safety Executive published the latest figures for mesothelioma deaths in the UK. The HSE has acknowledged that British mesothelioma (most significant asbestos related disease) death rate is now the highest in the world and their latest figures show that this is continuing to rise.

These figures are considered to be very significant to the argument against asbestos in school as they are all non building related professions. The Teaching profession should have little or no contact with asbestos, but HSE statistics show that teachers are dying of asbestos disease at a rate of death far higher than they would had they had no asbestos exposure.

The death rate is, for instance, significantly higher than occupations such as farming or forestry where they genuinely have little or no contact with asbestos. 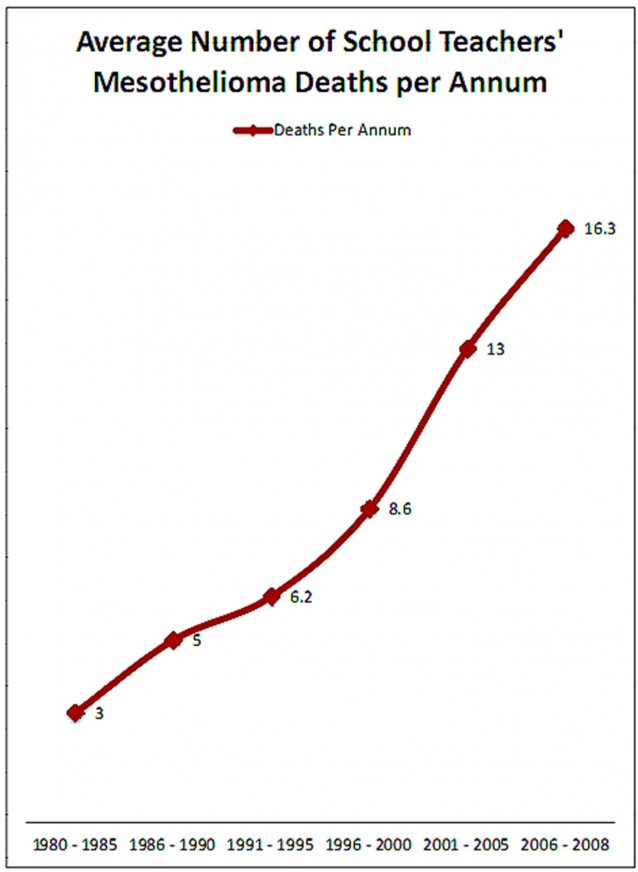 So what should schools do?

This question is answered – with effective asbestos management.

Although concerns have been raised over the government’s position of “managing asbestos” in schools, at this current time this is still the enforced recommendation.

Headteachers, bursars, business managers, school governors, and other members of the school management team all need to know who is responsible for asbestos management procedures and documentation, and for ensuring that this is always followed.

School management teams must ensure that maintenance, repair work and improvements on school buildings are carried out safely. This means that:

You can review how your school is performing on asbestos management by using the Health and Safety Executive (HSE) checklist, which you can be downloaded here. Schools Asbestos Checklist.

Are you compliant? Get further help.

← New Asbestos Approved Code of Practice still a work in process... Why should you seek out a UKAS-accredited organisation when commissioning an asbestos survey? →

The best way to get an accurate asbestos quote is to call one of our experts now on 0844 800 0801. Or, click here for a quick web quote, click here and complete the online enquiry form. Get My Quote Now!