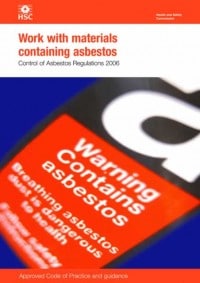 Following the introduction of The Control of Asbestos Regulations (CAR) 2012 earlier in the year, the accompanying approved code of practice (ACOP) is still to be released.

A full consultation review of the current ACOPs L143 and L127 undertaken by the Health & Safety Executive (HSE) finished on 14th September 2012. The comments and feedback are currently being analysed.

An overview of the comments received are that ACOP’s should be made easier to understand and simplified. ACOPs will not be restricted to a 32 page limit as intended for other health & safety documents. Information within the documents are to be presented in bullet points instead of large blocks of text.

Sections on the duty to manage are also being looked at and it is thought that some of the items recently issued by HSE will be signposted again to cut down on duplication of information in various different documents. It was reiterated that the main thrust will be to make the documents easier to use and understand.

There is a proposal to merge the two ACOP’s and from comments received so far it is a 50/50 split for and against. HSE are possibly more in favour for the merging of the two documents, however if this is the case the document will be clear and defined. HSE are keen to remove duplication of information and duplication of regulation.

The process of drafting the new ACOP will be internal at first, trialling of a template design which will be internally circulated at the HSE, then once satisfied this will be shared with stakeholders which should hopefully be by Christmas 2012. The stakeholder comments and feedback will be taken into consideration and will again be internally reviewed in February / March 2013 and will then go to the HSE board. There will then be a public consultation in May and then once all revisions and amendments have been completed the HSE are looking to publish in the final completed Approved Code of Practice in November 2013.

For further information and help understanding asbestos regulations contact us on 0844 800 0801.

← Control of Asbestos Regulations 2012 Case Study: Is Asbestos Really an Issue in Schools? →