Asbestos found to be present in debris on Carmarthenshire beach 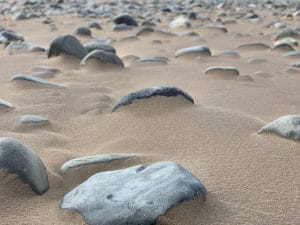 A Welsh council has confirmed that material unearthed by coastal erosion on a beach in the town of Burry Port contains asbestos, following earlier fury about children allegedly using “flaking” pieces of the substance to build sandcastles.

Carmarthenshire Council requested that tests be carried out on the fibres after concerns about suspect material spotted on a stretch of beach to the east of Burry Port Harbour.

Land behind the beach was previously occupied by the vast Carmarthenshire Bay Power Station, which was demolished in the 1990s. It is believed that remains of the old structure are the source of the grey, corrugated pieces of debris that have caused such consternation among locals.

The authority’s executive board member for public protection, Cllr Philip Hughes, commented following the tests: “A small amount of material has been identified as containing low-level asbestos which is of low risk to the public, and we are taking all necessary steps as a precaution, including the safe removal of any visible material.

“This is an ongoing situation which will be continually re-assessed… although the material is of low risk, we do advise that if anyone spots anything of this nature on this small stretch of beach not to pick it up.”

The council put up signs in the area earlier in June, alerting people that material potentially containing asbestos had been discovered. The South Wales Guardian reported that council leader Emlyn Doe was set to meet Burry Port councillor John James later in the month to discuss the situation.

Cllr James welcomed the meeting, stating that he had been contacted by several concerned residents about the issue. He called for the Burry Port section of the coastline to be reassessed in relation to its suitability for building applications approved years ago, in light of what he said was the area’s vulnerability.

He commented: “Health and people come before profit and peril, whether it’s this generation’s or the ones to come.”

Meanwhile, Michael Theodoulou, Pembrey and Burry Port town councillor and mayor, said the community council was also worried about the situation. He said that several tests of the debris – paid for by local residents – had uncovered different types of asbestos, which indicated “it’s more than a little bit of asbestos.”

Cllr Theodoulou had earlier commented, before the presence of asbestos on the beach was confirmed: “I think it is a huge problem and I am angry about this. I’m not going to let it go because children are playing on the beach and there’s evidence they are using crumbling and flaking asbestos to decorate their sandcastles… this is a danger to my community.”

For a fast and free quote for any of our range of asbestos services here at Oracle Solutions, please call 0844 800 0801 or send an email to our professional and friendly team.

← Barking Town Square set for replacement asbestos memorial The Best Asbestos Training They Have Ever Received! →