What do we know about ASBESTOS related disease?

Do you want to know the latest statistics released by the HSE?

The health and Safety Executive have released their latest statistics report. We’ve put together a summary of the key facts:

Each year thousands of people die from work related diseases mainly due to exposures many years ago. The numbers of deaths from these diseases usually have to be estimated rather than counted.

The current estimate of the annual number of occupational cancer deaths in Great Britain is around 8000. About 4000 cancer deaths each year are due to past exposure to asbestos.

In 2009 there were 411 deaths where asbestosis is likely to have contributed as a cause. There were 189 deaths with asbestosis recorded as the underlying cause.

Mesothelioma deaths occurring now reflect industrial conditions of the past. Male deaths under 55 have been falling since the early1990’s. 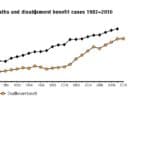 If you want to know more about asbestos and asbestos health effects, come and join one of our UKATA asbestos awareness training courses. On successful completion of the course you will: